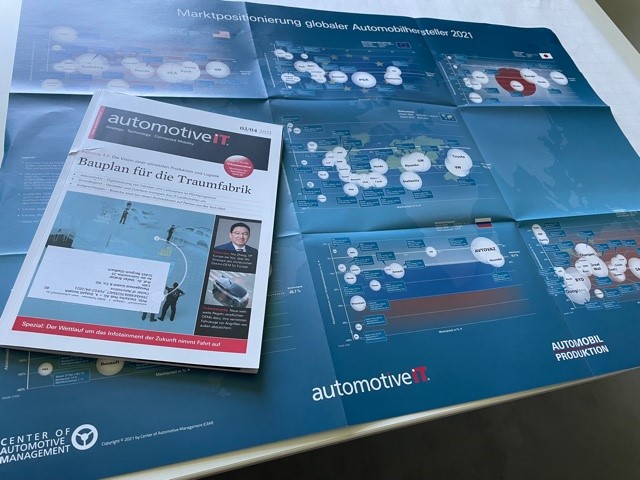 However, the situation for automakers in the key automotive markets of China, the USA and Europe is in some cases quite different. This can be seen from the CAM's updated market positioning matrix. For example, German manufacturers and Tesla benefited more than average from a very robust automotive market in China (-1.8%) despite Corona. All the more so as these manufacturers already hold a strong market position in China. BMW already sells over 33 percent of its vehicles there and increased its sales by 7.4 percent. Daimler was able to sell 9 percent more vehicles there, with China having a market relevance of 32 percent for the Group. Tesla achieved an increase of 217 percent in China last year, which means that the company now sells over 27 percent of all vehicles there.

Particularly hard hit by a sharp decline in the automotive market in Europe (-23.6%) are those automakers that have a strong market position there. PSA sells around 87 percent of its vehicles worldwide, which means that the negative growth of -28 percent adds up to a drop in sales of almost 850,000 vehicles. At Nissan, on the other hand, the drop in sales of the same magnitude due to its lower market relevance of 8.1 percent is only reflected in a volume decline of 125,000 vehicles. Market leader Volkswagen sells almost 35 percent of its vehicles worldwide in Europe, and only recorded a year-on-year decline of 21.4 percent, which, however, corresponds to a drop in sales of 867,000 vehicles.

In the US auto market, sales slumped by 14.5% in the full year 2020. The big losers were JLR (-35%) and Nissan (-33%). The VW Group can even gain market share with a minus of 12 percent. However, at 6.3 percent of global sales, the U.S. market has only a relatively low market relevance for Volkswagen. Toyota returns to second-highest market share in the U.S. (after GM but ahead of Ford ) thanks to a slightly above-average performance in 2020 (-11.3%). The world's top-selling Japanese automaker sells over 22% of its global sales there.

CAM's updated market positioning matrix provides an up-to-date overview of the strength and dependencies of global automotive manufacturers in the key automotive markets of the USA, China, Europe, Russia and Brazil. The matrix shows market share, sales growth and market relevance for each manufacturer in the most important automotive countries.