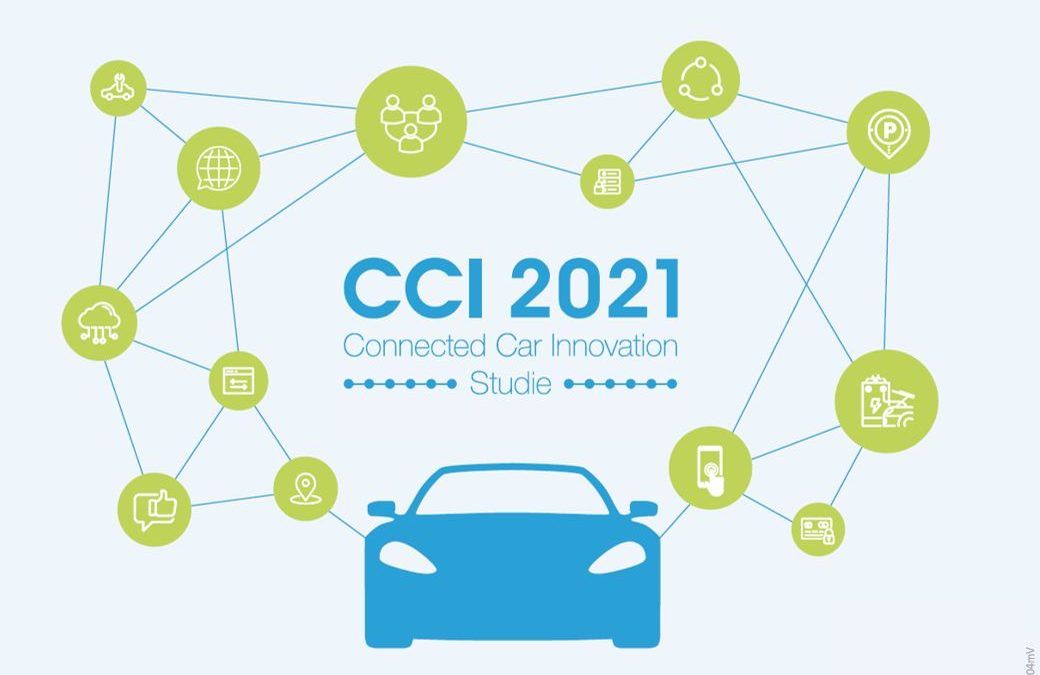 The Connected Car Innovation (CCI) industry study examines innovation trends and innovation performance in the automotive industry in the area of the connected car. The focus is on the rapidly changing automotive future fields of connectivity, interfaces, autonomous driving and connected services. Based on around 3,400 innovations in the period from 2015 to 2020, the current development trends were presented and a projection for the year 2030 was made. Also analyzed are the strategic competencies that play a key role in the long-term success of the industry. Innovations in the future fields of connectivity, interfaces and autonomous driving have tripled in the last 10 years and mark a turning point in the automotive industry.

Ranking of the OEMs in the Connected-Car-Innovations-Ranking

The current performance and innovation strength of global automotive manufacturers in the areas of "Connected Car" and "Connected Services" was empirically determined by means of the annual industry barometer "CCI Index". The innovation strength of 25 global automotive manufacturer groups in 2020 was assessed on the basis of a total of 333 connected car innovations and 73 connected car services (see Figure 1).

Despite slight losses, the German automakers were able to maintain their leading position in the CCI innovation comparison. The Volkswagen Group remains the most innovative automotive group in the connected car sector. Daimler is close behind in second place, while BMW comes in third. Tesla comes in fourth, with Great Wall, Hyundai, SAIC and Ford following in fifth to eighth place.

Great Wall is the first Chinese automaker to make it into the top 5. Great Wall is also the biggest climber compared with the previous year, gaining 14 places. Newcomers from China such as Xpeng and Nio are increasingly competing with the established automakers. In the innovation comparison of automotive countries, China is accordingly playing an increasingly strong role: While in 2016 only seven percent of global innovation strength was provided by Chinese automakers, this figure will rise to a record 25 percent in 2020. Although Germany still leads the field with 35 percent of global innovation strength, it is unable to maintain the high global innovation shares of previous years (2016: 43%). In third place are the American manufacturers with 16 percent, ahead of the Korean automakers (7.1%).

The CCI innovation strength of the Japanese manufacturers is disappointing, at only 6.7 percent. Large established manufacturers such as Honda, Renault, Nissan and PSA only have a very low CCI strength. PSA has suffered the greatest losses compared with the previous year: The French manufacturer, which has since been merged with FCA to form the Stellantis Group, loses 14 places and now only ranks 23.

Connected services already play an important role for innovative automakers, for example in the fields of infotainment and parking and charging services. The analysis of the performance status of connected services in a comparison of 30 automakers reveals the strong position of Tesla and Chinese newcomers: Tesla is in first place by a clear margin, followed by the Chinese startup Xiaopeng with its Xpeng brand. Volkswagen, Daimler, BMW, and the Chinese startup Nio follow in second place, while established manufacturers such as Ford, Toyota, PSA, and Nissan are at the bottom of the list.

Figure 2: Connected Services market potential worldwide in 2030 by use cases

Connected services promise significant revenue potential for automakers in the coming years (see Figure 2). These are not so much one-off revenues from vehicle sales or hardware features, but rather recurring software-based digital services for the entire connected or autonomous car fleet of automakers. Based on the Connected Services use cases presented in the study, potential revenues of 800 to 1,000 euros per vehicle per year can be achieved in 2030, which could lead to total revenues of over 200 billion euros worldwide. Take Volkswagen, for example: At the Wolfsburg-based group, Connected Service sales alone could amount to 29 billion euros in 2030 and the profit share to four billion euros per year.

However, the development of strategic competencies in the fields of the future is an important prerequisite for realizing revenue potential in the Connected Services area. In the next 10 years, the connected car sector will be characterized by considerable innovation dynamics, in which new business models and new competitors from the big data environment will play a central role. The success and medium- and long-term survival of the players will depend to a large extent on the development of "strategic competencies" in the areas of vehicle architecture, connectivity and autonomous driving. In this context, strategic competencies are understood as internal and external knowledge elements, human resources, technical resources and business processes. For the strategic competence fields in the area of connected cars, the development status of the most important players was assessed on the basis of various criteria.

New vehicle architectures are the prerequisite for predominantly software-based value creation in the fields of the future. In a comparison of competencies, there are considerable differences between the relevant players. Components of these new software-based vehicle architectures are: One or a few central computers with high performance (processing large amounts of data), the development of an OEM-owned robust vehicle operating system (over-the-air updates, separation of hardware and software functions in the domains), and a cloud/IoT connection that enables stable connection with other smart devices and the infrastructure. A comparison of players' competencies in driving train architectures identifies Tesla and Alphabet as pioneers, while many incumbent manufacturers are in a multi-year catch-up process.

The Connectivity/Infotainment competence area is dominated by the three strategic competencies of user interfaces, vehicle-to-X/Internet of Things (IoT) functions and service platforms. Tesla, Alphabet and Alibaba are ahead in this future field due to their very broad expertise and excellent strategic positioning. In a second cluster are the German OEMs, whose competencies lie more in user interfaces and V2X applications. The tech players are mostly convincing due to their strategic positioning by means of the available connectivity and infotainment services in many different application areas, which can be introduced via their existing digital ecosystems.

Various hardware and software competency areas have been identified as strategic competencies for successful development in the future field of autonomous driving (level 4/5): sensor technology, actuator technology, computer architecture, software and data. There are also overarching competencies that relate in particular to the safety of the systems. In (fully) autonomous driving, the Alphabet subsidiary Waymo currently has the highest competencies, including the most extensive testing experience. A field of technologically highly rated players consists of Intel and Amazon as well as GM, Baidu and Pony.AI. Also in the upper midfield are the automotive OEMs Volkswagen, Tesla and Hyundai, whose strategic competencies are assessed at a similar level (cf. Figure 3).

It can be seen that in the relevant future fields there is a striking asymmetry of competence between established car manufacturers and some technology or digital players (e.g. Alphabet, Intel, Didi Chuxing).

Study director Stefan Bratzel comments: "Only a few automakers (e.g., Tesla, VW, BMW, GM) will be able to acquire the strategic competencies necessary for business success in the medium and long term on their own. In many cases, automotive manufacturers will have to rely on in-depth collaborations with competence providers from the digital world in the fields of the future. For automotive manufacturers, it is important to select precisely which companies to cooperate with in which fields, and in which areas success-critical competitive situations will arise for the customer or the value creation of the future."

By combining automotive-related and digital competencies within an agreed strategic cooperation, the parties can compensate for mutual competence deficits and improve their competitive position to a high level.

Figure 3: Competencies of players in the field of "autonomous driving systems" (Level 4/5)

About the study: Connected Car Innovation (CCI) is an annual industry study that empirically surveys and compares the performance and innovation strength of 30 global automotive manufacturers in the areas of connected cars and connected services as well as their market strength based on various indicators. The study is based on CAM's AutomotiveINNOVATIONS database, in which the innovations of more than 80 automotive manufacturers are continuously collected and evaluated. In addition, the Strategic Competencies of automotive manufacturers and of digital players are analyzed on a regular basis. The (CCI) Study 2021 was prepared for the 7th consecutive year by the Center of Automotive Management (CAM).

Further information on the study (incl. short/long version) can be found at: https://connected-car-innovation.de/.