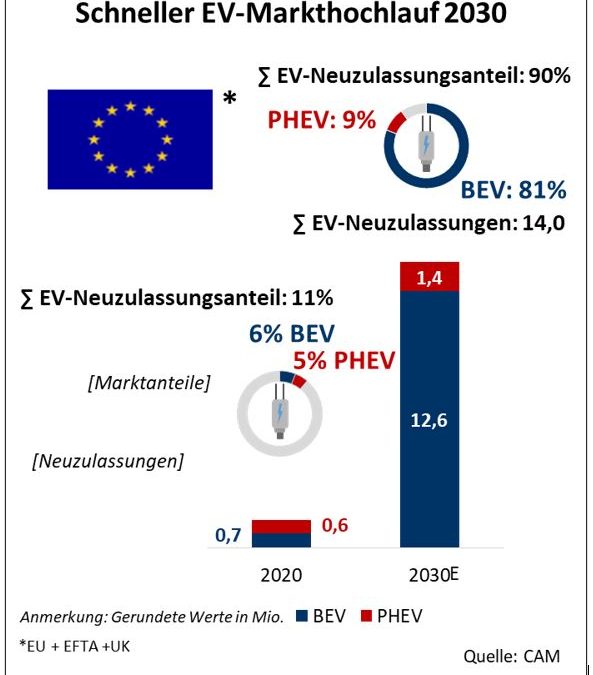 Scenarios of the market ramp-up for the year 2030

The global market dynamics of electromobility accelerated considerably in 2020 against the backdrop of a changed regulatory backdrop and more stringent climate protection targets. In this context, e-mobility is rising against the Corona-induced declining overall market trend. In 2020, a total of 11.9 million new passenger cars were registered in Europe (EU+EFTA+UK). This represents a decline of around 24 percent compared to 2019. In contrast, electric vehicle (BEV/PHEV) sales in the European market increased by almost 144 percent to a level of around 1.3 million vehicles. EVs (BEV+PHEV) have a new registration share of just under 11 percent in 2020. BEVs account for about 6 percent and PHEVs for about 5 percent. In the first half of 2021, this trend accelerated further with an EV new registration share of around 17 percent. In Germany, the market share of EVs after six months of 2021 is now 22.5 percent.

Against the backdrop of stricter climate protection regulations and already enacted registration bans for internal combustion vehicles in some countries, a further significant increase in the global EV market share is expected for the year 2030. Three scenarios were developed to estimate the EV market in Europe, which differ in terms of the speed of market ramp-up.

In the "Fast Scenario," which models a very dynamic EV market ramp-up, the EV market share in Europe rises to 90 percent in 2030. BEVs account for around 81 percent of total new passenger car registrations in Europe, while just under 9 percent would be plug-in hybrids. For the overall market in Europe, 15.5 million of the new registrations in 2030 - in all scenarios - are assumed. The EV market share of 90 percent thus results in absolute sales of around 14 million electric vehicles (EVs), comprising 12.6 million battery electric and 1.4 million plug-in hybrids.

These developments are primarily due to the ambitious regulatory requirements (CO2 fleet legislation), sharply falling battery prices and the very well developed charging infrastructure. As a result, the BEV/PHEV ratio among EVs is clearly moving in the direction of the more sustainable and less expensive battery electric vehicles. Consequently, the BEV/PHEV ratio among EVs in this scenario is 90:10 in favor of BEVs.

Further information on the study: https://auto-institut.de/e-mobility/